Nick Hardwick is a former NFL Pro Bowl Center who played 11 years with the San Diego Chargers. Since his retirement in February of 2015, Hardwick transitioned to the media side (TV, radio and digital) and holds multiple positions as: Field Reporter for the San Diego Chargers Radio Broadcast; local TV sportscaster on Fox 5 San Diego; weekly radio contributor on three iHeart Radio stations; and host of “Behind the Bolt with Nick Hardwick” on Fox Sports San Diego (TV) and the Chargers website. In addition, Hardwick keeps busy as a motivational speaker, trains NFL Draft prospects and is developing a new digital training program for high school and youth football players. Nick lives in San Diego with his wife Jayme, and their two boys, Hudson (4) and Ted (2). 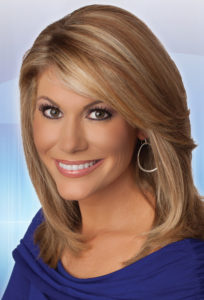 Heather Myers is a native San Diegan and is thrilled to be working in her hometown. “It’s true. This really is America’s finest city,” Heather said. She brings her passion for storytelling and knowledge of the county to San Diego 6 News in the Morning, weekdays from 5:00-10:00 a.m. Heather joined San Diego 6 News in November 2007 as the weeknight co-anchor of San Diego 6 News at 10 p.m. In 2011, she joined Marc Bailey as co-anchor of San Diego 6 News in the Morning. Heather has covered some of the biggest stories in San Diego and Southern California. She was on the front lines of the 2003 and 2007 wildfires. She reported from the Mt. Soledad and Laguna Beach landslides. She also went to the areas affected by the 7.2 earthquake that hit the region in 2010. Heather enjoys spending her time with her husband, 2 little boys, and lab-mix Capone. “When the work day is done in the morning, I rush home to be with my sons. This job allows me to live a full life as a news anchor and a mom.”